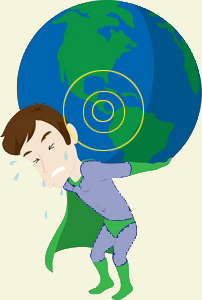 It is like having a super-power. Perhaps a bit overstated, but essentially true. The nature of the business of real estate does give one an ear to the ground on how things are going with the economy, social trends and by extension, the quality of life In The Zone. We all are curious to some degree about “what’s going to happen” and so we are on the watch for data, for information that’ll give us a clue as to what the future will be like.

To illustrate: Pre-Super Bowl talk shows. These popular shows are really about nothing more than guessing what is about to happen in the next few minutes. Player’s strengths and weaknesses are analyzed, their past injuries are discussed, and notable personal traumas might even play a bit into the picture. And this is all around what is about to happen with something that really isn’t going to impact the quality of anyone’s life to any appreciable degree! We humans love to speculate on what is going to happen in the future.

So, I’ll give you my read. I’ll tell you what my crystal ball says regarding what the future might look like here in The Zone. To do so however, I’m going to step outside of The Zone to look at global conditions that factor into our impending future here in The Zone.

Going Global
More than at any other time in all of my 52 years, I see, hear and feel more concern about the viability of life on planet earth. The hot topics on people’s minds are:

Climate Change:
In a recent visit to the States I was made aware of the shift from calling it “Global Warming” to “Climate Change”. It turns out that there is a fellow that studies language and the effect that particular words have on the listener. He felt that “Global Warming” was too dire and alarming, whereas “Climate Change” was a gentler, kinder way of referring to what some feel is the biggest issue confronting mankind. He admits that he now feels differently about this issue, but what’s done is done. And so now we deal with “Climate Change”.

Economic Crisis:
I’m certainly no economist, but I think that it is clear that the world’s economy is in historically bad shape. Some are now saying the “D” word (Depression) and concerns about hyper-inflation abound. Gold is all the rage these days and financing is very difficult, at best, to acquire.

2012:
Whether scientist or new ager, the coming year has any number of options to select from. The ancient Mayan calendar ends in 2012 and so a number of enthusiasts feel that this is a prophesy implying the end of the world. Scientists, on the other hand, are monitoring magnetic activity on the sun and are saying that there is going to be a rather brief, but devastating magnetic shift that is going to cause profound changes to our way of life – all micro-chips are going to fry.

Biblical Prophesy:
The Bible talks about a “great tribulation such as has not occurred since the world’s beginning no nor will occur again”. Keep in mind that the Bible is where we get the account about the flood that destroyed all life on planet earth aside from the animal life preserved on the ark and 8 humans. So, a “tribulation such as has not occurred before” is pretty significant. I’m inclined to think that it is the human element that is going to really cause the tribulations, the civil strife that can come from discomfort. When we humans get hungry, or cold, or hot, we can get pretty nasty. One expert says that these days when war is still viewed as exceptional will be viewed as the good ole days.

If there is any doubt in the universal court of justice, I’d be surprised. Mankind has failed miserably in the “how to live on planet Earth” project. Or, as the popular website “The Onion” put it with this headline:

What is the effect of all this on the southern pacific zone?

Well, all of this can work fer’ us or it can work agin’ us. When the economic collapse began, the real estate business was profoundly impacted here in Costa Rica. Quite a few real estate companies closed their doors. I can’t help but think that this was caused more by people being shocked by the change than by an actual lack of money. I suspect that people have less money now than they did back then at the beginning of the crash. So it was an emotional effect.

I don’t think that we will go through that again because we’ve already gone through it and are now accustomed to the new world in which we live – economically that is.

I have talked with a number of people who have philosophically concluded that “life is happening now” and so they aren’t going to wait for the perfect moment to move to Costa Rica. What we are seeing in real estate is an increasing number of people that want to re-locate to Costa Rica, full time or part time, but they will need for their property to be income generating, such as a vacation rental or a B & B. They aren’t in a position to retire yet. Some express concern about the viability of Social Security and other retirement funds.

Another type of property that is enjoying increasing popularity are off-the-grid, eco or green parcels of land that are large enough to accommodate communities of like-minded families living there. These properties need to have their own source of water such as a spring and it is helpful if there is a river where a possible hydro-electric plant can be put. Enough land where a tilapia pond, vegetable garden, goats, bananas and various fruit trees can be propagated. There is increased interest in self-sufficiency as we watch the old-world icons of stability crumble and fall.

Income generation, self-sufficiency and then there are the turnkey types that are somewhat of a new presence here in the zone. I suspect that the enhanced accessibility of The Zone has a lot to do with this new “type” of guest. The Zone used to be typified by stout, hardy individuals that wanted to get out beyond the margin and forgo the comforts of society. Now, we are seeing “types” that are looking for existing homes. The lack of funding is affecting this market place to where homes in the $300,000 range are quite popular and don’t last long on the market.

There you have it – a few of my observations (read: real estate guy super power for reading the future) for the near future based on the earth vibrations in our neck of the world.