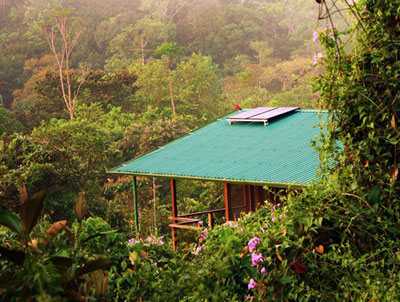 My business partner Ben likes to call them the “End of the World-ers”. People who have reason to believe there will be major global changes in the near future. They are interested in buying land and living off the grid in Costa Rica. By off the grid I’m referring to not being connected to the government-run electrical system. They are looking at Costa Rica as a relocation option, because of favorable factors like- weather, low taxes, friendly culture, good health care, etc. Recent “End of the World” clients include– a couple from France interested in le Costa Rica, a large family from California tired of the rat race, an eco-hotel group from Switzerland… clearly, living off the grid in Costa Rica is on the global radar.

If you’re anything like the aforementioned relocators wanting to buy land here, you’re in luck!  There are many big fincas (Spanish for farms) in this renewable energy Eden.  We use the term farm, but only a very small subset are actual working farms with barns, cows, and roosters.  Drive 15 minutes into the mountains above Uvita or Ojochal and you can find stunning property with flowing water; some even have ocean views!  The best news is you can grow many different types of food in the mountains of Costa Rica.

Most big fincas range from a short walk to town (and close to electricity lines) to 25-minute 4wd dirt road drive to town and no electricity for kilometers.  The beauty, privacy and value of farms way up in the mountains are exemplary, but what to do about power?

Installing a solar power system is smart, especially in the southern Pacific zone of Costa Rica.  This region sits at around nine degrees North of the Equator which offers 12 hours of Sun/day, and there is relatively little variation throughout the year. Solar panel energy production is calculated at half that number (6 hours) in rainy season and/or at higher elevations that often have more clouds cover.

Reportedly, Costa Rica has agreed to lift the tariff on imported solar panels and accessories, so the price to install a solar system shouldn’t be as cost prohibitive, moving forward.  Solar systems with batteries for storage are completely self-sufficient.  In addition to solar panels and an inverter, this type of system requires batteries to store the energy created for use at a later time.

If you’re going to be off the grid, experts recommend an alternative energy source to compliment the primary system.  This is especially true during months with heavy rainfall/cloud cover (September-November).  Gas-powered generators are nice to have, but for truly sustainable off-grid power, you’ll want to consider hydro or wind turbine options.

If you think about it, wind… is actually a form of solar energy. The earth’s atmosphere is heated unevenly by the sun and this phenomena (modified by different terrain—bodies of water, vegetative cover, etc.) creates wind.   We see a version of this here in the southern Pacific zone of Costa Rica.

Every day around 10am, an ocean breeze blows on-shore.  This breeze lasts for five or six hours and tops out at around between 8-10 knots.  Most (affordable) wind turbines need more than 10 knots (11.5 km) to generate substantial kilowatts/hour number.

Hydro power, on the other hand, is viable option if your property has a river on it with a significant drop in elevation.  According to Paul at Osa Water Works, these small-scale hydro systems can produce over 2kw/hour (that’s 48kw/day!).  Paul bases energy consumption at around 30 kw/day as an average.  Obviously, that average will be higher if you have a swimming pool on your sustainable farm, but something tells me that’s probably not high up on your list.

What is high up on the list is water.  Fresh water, usually in the form of natural springs and rivers, or a year-round creek at the very least, is a must.  If you are going to buy land and live “off the grid”, you would be smart to buy a property with a river running through it or along one of its borders.  This is one of the few continuous (as in 24 hours per day continuous) renewable power resources on the planet.

There are a couple of details specific to Costa Rica, namely obtaining a concession (i.e., legal right to extract water from a given source).  In the interest of providing legit information, I asked hydro-expert Paul Collar at Osa Water Works about concessions as they relate to hydro-systems,

“Technically, you are not mandated by law to have a concession for any water extraction.  However, you are expected to apply.”

I asked him if the river had to run through the property or simply run along one of the borders.

”You do not have to own the land adjacent to where the water is being extracted to secure a concession, BUT, you must bound the river at some point, preferably continuous to the property where the water is to be extracted.  As part of the concession application, you ARE REQUIRED to make the bounding property owner aware of your intentions and he must either sign off and agree to your request… or alternately you must sign (and have a witness sign) to the effect that the bounding property owner was made aware of your intentions but refused to sign the form in question… however, having an agreement between the parties is infinitely preferable as a hostile relationship poisons the well.

I found Paul’s comments (and pun) insightful, and many others seem to agree given his business activity has remained strong during the downturn.  Although not specific to “off the grid” clients, his final thoughts on Costa Rican governments move to allow small scale, alternative energy systems (solar, wind, hydro) tying into the grid.

“ICE is presently in negotiations with Setena and MINAE to ELIMINATE the requirement of a concession (for grid-tie systems).  At present, the wording is that a concession must be in hand for a completed grid-tie hydro authorization, but since concessions take up to two years and ICE is fully behind their grid-tie initiative, this agreement is expected to smooth the path to hydro permitting for most.

For an overview of Water in Costa Rica, I wrote a two part article a couple of years ago.  Costa Rica is considered one of the more “green” or environmentally conscious countries in the world.  The government has repeatedly stated its intention to be carbon-neutral by 2021.  That’s only 9 years off, and it’s one of the reasons Costa Rica real estate is on the radar of many people who want to relocate and live a more independent and sustainable lifestyle.

For more information on Costa Rica real estate, browse our listings at: www.propertiesincostarica.com  or contact us on our contact page here.

For more information on alternative energy systems in Costa Rica, contact Paul Collar at Osa Power and Water 011-506-8704-0027 or visit his website:  www.osapower.com .