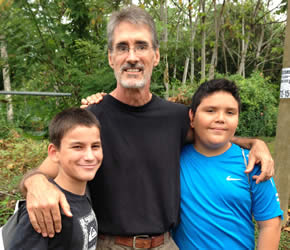 The reasons for moving to, or visiting Costa Rica are diverse. In my time here I have been asked the question “why did you move to Costa Rica?” so many times I’ve lost count.

However, I am not just the askee of this question. I am the asker of the same question, different sense. “What is your interest in Costa Rica?”, the answer to which tells me volumes about the person I am talking with.

Cultural Convection: Things are changing here in the southern zone. I think of it as a “cultural convection”. It’s like the ever-present breezes here on the coast around The Zone. The breezes come in off of the ocean in the morning. As the earth warms throughout the course of the day, the inland flow changes and the breezes push back out to the sea in the afternoon and evening.

I think that there is a parallel with the human element. Those who came here some time back came here for reasons that are at odds with what is happening now. That is to say, the answer to the question “why did you move to Costa Rica” is now sometimes different than it was in times past, and the convection is causing a migration. Some are leaving and many are coming.

Progress & Advancement 1: Dominical, Uvita and Ojochal are “growing up”. There is progress and advancement. We can apply these terms based on their conventional definitions, much of which centers around human convenience and consumption. We view a culture as advancing if it is providing the latest in human conveniences.

A few years ago, none of that was here. There was a soda (Costa Rican typical restaurant) called El Viajero and a pulpería (typical Costa Rican neighborhood general store).

Now there is talk of an International airport going in in Palmar Sur, about 45 minutes to the south. There is also quite a bit of talk globally about Costa Rica’s “pot of gold at the end of the rainbow” – the southern pacific zone.

What I’m doing here: I moved here for two primary reasons. Culture and language.  I am a father of three, and at the time I was a husband of one. My wife and I felt that these two things, culture and language, were of sufficient importance that we were motivated to leave the rather pleasant life we had in the mountains of Colorado, specifically the gorgeous surroundings of the Aspen Valley, and move to Costa Rica.

With Culture and Language as our answer to the question “why did you move to Costa Rica?”, selecting where to move to in Costa Rica was the task at hand.  Our objectives moved us to select San Isidro de Perez Zeledon. We were not looking to move to an enclave of North Americans, quite the contrary. We were moving where there were none. It had to be so. How else would we get the experience of culture and language?

Culture: Whereas we LOVED our lives in Colorado. We simply wanted to broaden out. We had been there twenty years and felt that seeing and learning another of the myriad cultures on this planet would be an effort that merited whatever it took. It didn’t even have to be better, just different.

Language: We had tried every conceivable means to learn Spanish in our home in Colorado. We found and bought any VHS Spanish lessons we could find (lamentably lacking at that time). I listened to the Berlitz Spanish cassettes so many times that I can still recite some of them by heart. I invested in a satellite dish hoping to pull in some channels from Mexico in the hope that my kids would find something of interest there to watch – and learn. We set aside times when we would speak only Spanish in the family – none of these ideas worked.

We had always thought we would end up in Mexico, it being so close. We did various visits there but found that there really isn’t ever a good time to move to Mexico. There was always something going on there, politically, economically, socially, that made us want to wait just a bit longer for things to change.

Then we found Costa Rica.

A three week family vacation to Costa Rica and we were bit. Six months and three (or was it five?) garage sales later, (having sold our house, cars, snowmobiles, mountain bikes, camping equipment, tools, Legos, home gym and, and, and… I don’t even want to tell you about the clothes.

I find that my personal reason for being in Costa Rica has not changed over the 14+ years. This puts me in a compromised position when my chosen profession has been, and to some extent still is, real estate.

What is there in this most bio-diverse, nature’s wonderland area of planet earth that makes convenience of access so important? There aren’t any hotels in the area to accommodate these visitors. They’ll need to be built. Visitors who are attracted by convenience and ease-of-access are not really going to be all that interested in the bounteous natural attractions of Corcovado – are they? Aren’t they going to want/need all the conveniences that they can access in southern Florida or California? Won’t ICE, the Costa Rican electric and tele-communications company, do whatever is necessary to provide for these mega-consumer’s electric needs?

Now, I understand that there is money to be made in the installation of an International airport in Palmar Sur. It is reported that land values jumped 30% up north in Liberia the day the international airport there opened.  There are similar projections for the southern zone. Its just that this sort of “progress” is contrary to what I’m doing here.

To stay or go is now a question that I hear being discussed amongst some of the long-term expats living in The Zone. I’ll go into that more in a coming article.

3 thoughts on “Costa Rica – What Are We Doing Here?”