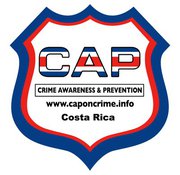 The bad guys, the criminals, are getting caught and thrown in jail here in The Zone, and the quality of life is in an upwards trajectory.

This morning was our monthly community meeting of CAP (Crime Awareness and Prevention). I can say that I am truly proud of this little group of giving individuals. The amount of good that they have done for us here in The Zone is impressive.

The Zone is defined as running from Ojochal up to the Baru river. We are hoping that this expands up to Matapalo, but for the moment, the northern edge is the Baru river in Dominical. The most tangible effect of CAP is that they have put a number of criminals in jail.

There is something about the Costa Rican justice system that is extremely sensitive to making sure they’ve got the right guy before putting him in jail. With the video cameras placed strategically around The Zone, the bad guys are getting caught on camera doing their dastardly deeds. The evidence is incontrovertible. There is no doubt that that was them, following the tourist couple, and then grabbing their backpack when they turned their backs. Or that the guy that is reaching in through the apartment window and coming out with the camera and other goods is the guilty party.  These folks are in jail, and they are no doubt talking about The Zone and how it probably isn’t the best place to ply their trade.

The cameras are a direct result of private funding.  The start of the new year is an opportunity for all of us residents to renew our $100 annual membership and get the new 2012 CAP sticker. Others are becoming believers and are quietly contributing substantially to the effort. One such contributor place $20,000 in the CAP account.

A truly momentous event, capping off the 2011 year for CAP, was the diligent efforts of one of the Team members, (of which there are about 10.) This member, let’s call him Jackie, helped to get CAP into an official “non-profit” status. Now our contributions can be deducted, among the many other benefits. This is a huge achievement here in Costa Rica.  The effort was greatly enhanced by the generosity of local attorney Eduardo Vargas, who donated a good amount of his time for the project. Jackie has had a good final quarter in that his efforts were also directly involved in securing the $20,000 contribution.

Jackie is just one of the many talents that make up this multi-faceted group. The prime organizer of the movement is referred to as Mom by many of the CAP members. She just has a way of making you want to participate.

It’s a bit awkward to start down the road of mentioning the individuals in this Crime Awareness and Prevention movement since many of them don’t want to be known as the shakers and movers of the highly effective anti-crime effort –  for obvious reasons. But also, there really isn’t any one contributor who deserves mention more than the others. They are all giving of their time, and whatever gift they possess in this life, they bring to the table in a way that contributes directly to the quality of life, not only for those of us who live here in The Zone, but also for the many many visitors who pass through The Zone each year.

Contributions can be made: