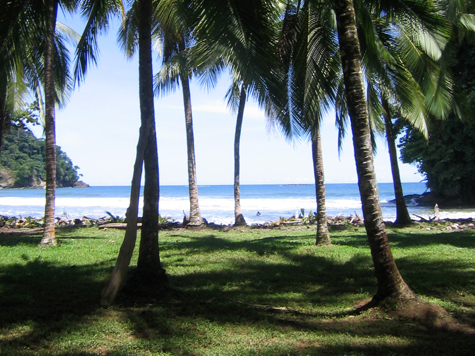 The Pura Vida Buzz — The last time I asked the question “Where is Costa Rica?” I was waaaaay back in college.  My roommates were surfers, and they mentioned Costa Rica as a possible surf destination.   Search engines weren’t as populated with information in the early-90s, but there were a few travel books in the local bookstore.  The thing I remember jumping out at me was the color green.  Whether it was the frogs, the jungle, or the aerial views… every page seemed to jump off the page with the verde.  It took me seven years to actually make it to Costa Rica, and I was happy to find that it was as good as advertised.

For those people still waiting for an answer to the question Where is Costa Rica?, I have attached a map>>>.  Costa Rica should not be confused with Puerto Rico.  Puerto Rico is an island; some refer to as the 51st State in the Union.

Costa Rica is a small country (by U.S. standards) It is bordered  by two countries, Panama to the south and Nicaragua to the north.  (Interestingly, “where is Nicaragua” garners 1/5th as many monthly, global Internet searches.)  Needless to say, Costa Rica is about the size of Vermont and New Hampshire combined, just with much warmer water.

Vacation and Retirement — There are many reasons why Costa Rica is an appealing travel destination—warm weather, intense bio-diversity, adventure activities (think- deep sea fishing, ziplines, rafting, surfing), friendly people, easy to get to,  relatively affordable to get to, many luxury options, and so much more.  People experience so many “firsts” in Costa Rica, it makes sense why it tops the lists of friends and family.

Clearly, everyone who considered buying land in Costa Rica visited first.  That vacation probably got the wheels turning and led to a subsequent trip.  If our current real estate listings are any indicator, there are many people who purchased raw land (think- a large lot without a house) before or during the boom.  Land options outnumber houses by more than 2:1.  That being said, we have seen a major increase in demand for houses and that category on our site is growing faster than any other.  (If you don’t see what you want, keep checking as I’m adding new listings every week.)

I recommend our beautiful area of Costa Rica (The Zone) to visitors and relocators without reservation.  But, the only way you can make this discovery is if you turn off the iPhone and the television… and come on down.