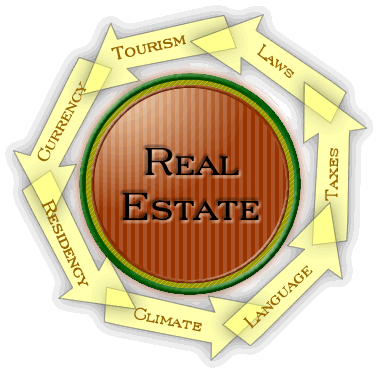 I got asked the other day what the opening of the new Matapalo Police station has to do with real estate, and by extension, why is it mentioned in my “Costa Rica real estate” blog? Well, I’ll tell you – it all starts with land.

I was told some time ago about a dinner party here in The Zone where the host got up on to a table and announced: “I would like for all conversations about real estate to stop. If you are unable to comply, please leave.” It is reported that the room went quiet.

Granted, this was back in “the day” – back when fortunes were being made on the buying and selling of land here in The Zone. Such conversations are not nearly as prevalent now as back then, but they are certainly a daily occurrence in my life, and I suspect that many here would make the same statement.

I contend that all news comes around to affecting, or being affected by land. If you are interested in moving here, migrating, retiring, or simply, to visiting here, the topic of property and its value will enter the picture. The managing of crime has a direct impact on the value of property.
As do:

I don’t want to have this bulleted list go down through your floor, so the”etc…” embodies all the rest. This list is based on my time spent talking with people who want to move or migrate to here.

Returning to Matapalo: it is receiving a steady flow of foreigners moving in as re-locators, migrators, and investors. They did not have a police station there before, so it could be reasoned that any self respecting thief would view that area as the place to be and to ply their trade. The presence of a police station has a positive effect on this scenario. One would then surmise that the value of land there will hold steady or perhaps increase.

Along with some of the other appealing amenities: screaming views, proximity to both Manuel Antonio and Dominical, proximity to a gorgeous, unpopulated and miles long beach, quiet living in Costa Rica’s tropical jungle, you can now add “enhanced security due to the presence of a police station”. My question: how can a Costa Rica real estate blog not mention such a thing?

Currency: The exchange rate of the colon versus the dollar. One of the hot topics going on right now in many sectors of the globe is what the effect of the “recovery” is having on tourism. Well, part of the fallout of the recession is that there are no good places to store dollars in the States. I hear rates as low as 0% or .6% or whatever, but they are all low.

Here in Costa Rica you can get up to 12% for a CD. This has resulted in an influx of US dollars into the country. Funny, you would think that this would be a good thing, but apparently it is not. I don’t understand it but I suspect that a better money-mind than mine could explain it. It has to do with the depressing of the value of the dollar against the colon, which is evidently not something that Costa Rica wants.

Costa Rica is now talking about taxing money as it leaves the country, presumably money that was gained through these investments.  Also, they are talking about loosening or letting go completely of the support that the dollar gets in its exchange rate with the colon.

Further evidence of my naivete when it comes to matters of international finance: I thought that the value of a currency was an organic process, defined by some actual value that a piece of currency represents. Not so.  The Banco Central of Costa Rica somehow controls this, and they are talking about letting go of the control (which would be more in line with my understanding of how these things work).

Please check the current rate as it changes regularly. This article will sit here on my blog for years to come so it may be very different at the time of your reading.

It is projected that this would result in a depressing of the value of a dollar due to the prevalence of dollars. The peak exchange rate was 575 colones to the dollar achieved in 2009. We are currently hovering right around the 500 colones to the dollar (which I like since it makes mental conversions easy. 1,000 colon bill is worth $2.00, etc…).  So if the controls are let go, we would see the dollar buying less colones.

Yes, this all has an effect on real estate here in Costa Rica. And it is the stuff of which conversations between Realtors and Clients are made.

Related Observation (actually, what isn’t related?): The hotels are claiming to be down in their occupancy so far this season. Restaurants are up, and vacation rentals also seem to be up. Explanation? Not from me, sorry.

I have heard the following data from a local restaurant owner who is part of a global effort to make Ojochal the culinary center for Costa Rica, so it may be that these data are, in fact, real.
Restaurant Numbers:

Meaning to real estate? Apparently, visitors are up in The Zone. Indicators are good for holding steady, and perhaps rising values of specific properties in Costa Rica (primarily houses).

More indicators of land values in the zone: