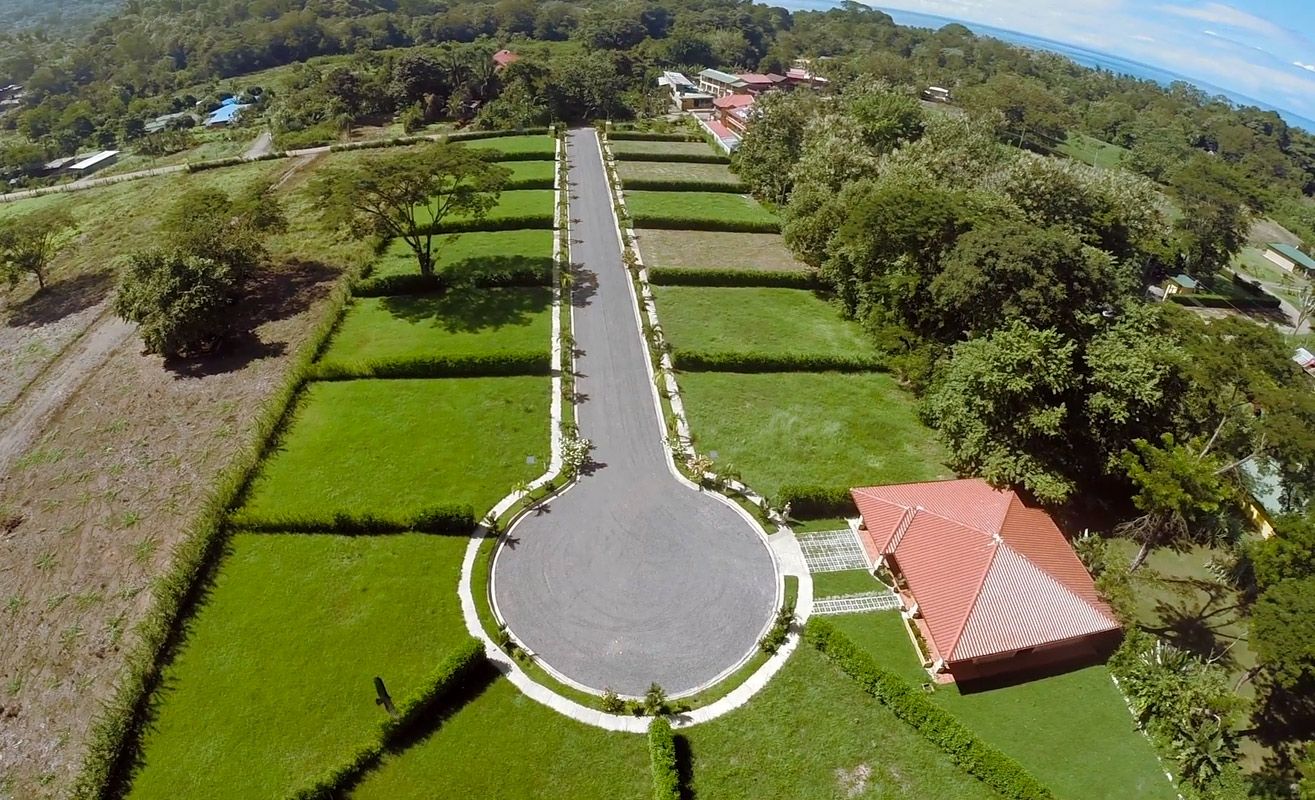 Typically the type of property that I have sold over my years in Costa Rica real estate have been multi-acre, ocean view properties. These have been sold to hardy individuals that have deemed themselves up to the task of taming these jungle laden acres to their will – and then keep them that way.

There is a new trend popping up in various areas around The Zone that the term “urbanization” aptly describes. These are boulevards & lanes lined with single family home lots. The developer provides the services: water, electric and the road. The lots are 200 to 1,000 meters in size (1 acre = 4,000 mtrs). These bring to mind a common suburban residential area in other areas of the world.

These new developments to the area have made the thought of, and the ability to, buy a property in Costa Rica and in particular The Zone, a reality for a new breed of property buyer, not to mention the investors whose left eyebrow goes up when the concept is presented.

I was approached a couple of years ago by an investor who had a question. He was looking to pick my all-knowing Costa Rica realtor brain (OK, he was going around talking with various realtors.) He had purchased a large property just south of Uvita. Uvita was growing faster than any other growth that I have seen in my one-half-century-plus life. At that time we had 3 banks, 3 pharmacies, 2 Internet cafes, doctors, a dentist and numerous auto mechanics in Uvita. This was all just a few short years from a time when just getting to Uvita was a dubious bet. The growth was truly explosive.

When he bought, it seemed that there was no end in site. Uvita was a robust real estate market and the concept was blue-chip through and through. There would be a residential community behind a commercial center that fronted the coastal highway and – here’s the biggie – you can walk to the beach. It is located on the ocean side of the highway which made the blue of the blue-chip concept quite royal.

Then, 2008 happened. Someone turned off the lights on the world economy. The recession shut down the market so completely here that sellers who had repeatedly lowered their pricing were told: “you can lower your price to $5.00. It won’t matter. There simply are no buyers”.

This resourceful developer asked me what I thought about an urbanization idea. A walk to the beach neighborhood, complete with sidewalks and nice landscaping. The utilities are all underground and the lots themselves will be in the 500ish meter size range.

My response to him was “Michael, this has never been done here before, so we have to guess. My guess is that it will work, but it is just a guess.” To me the concept was akin to the early investors that bought land here in the area – I like to refer to them as The Mavericks – they bought land here in Costa Rica’s southern Pacific zone at a time when there was no rational reason to do so. It was so rustic and jungly that it required genuine “visionary” status to make a buying decision.

The Mavericks saw some insane returns on their decision. Turn a dollar into $120 and you’ll get an idea of the early days in the Costa Rica real estate market around these parts.

The spread for this 2nd tier investor is nothing like that. He is setting out to get his initial investment back and so with the bar set low, he has set out with an untried concept and voila! We have a neighborhood project just on the south side of Uvita where you can buy a lot for $40,000 and by the time all is said and done, you’ve got $200,000 into a beautiful home in a nice area with that oh-so-desirable walk to the beach component that so many are looking for.

Villa del Sol: 5 have sold so far. There is a lovely model home done and 1 house broke ground yesterday. I understand that one of the other sold lots is going to start construction soon.

Funny thing about this concept – others have had it as well. I am currently aware of at least 3 other such projects in the Uvita area. Two of which are being developed by Ticos (Costa Ricans) and one other by a US developer who has previously had some success with luxury homes. It appears that it is an idea whose time has come.

I can’t speak much about the other projects yet. I ran into one of the Tico developers the other day and asked him how his project is going. He has sold 15 lots in the $12,500 range. They are half the size of Villa Del Sol lots and the electrical wires are above ground, which is an important point. The net result, to my way of thinking, is that these won’t appeal to foreign tastes and will mostly sell to locals but… we’ll see. I assume that the US developer will go underground with his. I’ll post more as I get the data.